January 29, 2015 — Well it’s time for the Seattle Seahawks to do battle with the New England Patriots in the 49th Super Bowl or you could call it the “battle for data throughput.” 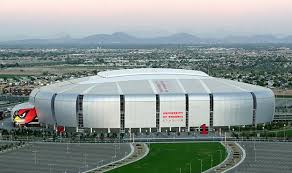 There are two things John Spindler, director, product management, TE Connectivity, can count on as his company works to ensure wireless service for fans, workers, media and NFL executives in the Phoenix area for the Super Bowl – wireless data process will be measured in the terabytes and the systems will be more complex than ever.

At the University of Phoenix stadium, home of the NFL’s Arizona Cardinals, TE deployed FlexWave Spectrum DAS to mobile coverage and capacity.

The Cardinals’ stadium is sort of a home field for TE. It deployed 33-sector DAS at the venue two years ago. The new system ups that number to 48 sectors and includes 96 main hubs, 49 expansion hubs and 225 remote antenna units to cover the stadium bowl, luxury boxes and service areas. The system supports various 700, 800, 850, 1900 and 2100 MHz LTE, CDMA, EVDO and UMTS services.

This year’s system will be used by neutral-host provider, Crown Castle International, which will serve the nation’s big four carriers at the stadium. On the other hand, at last year’s Super Bowl at Metlife Stadium, Verizon deployed a 44-sector system TE Connectivity system and AT&T deployed its own Commscope system, which used 63 RF sectors.

“In a way, a neutral host provider makes things easier for the venue owner, who doesn’t have to negotiate with multiple operators,” Spindler said. “There are other efficiencies with a single system in terms of equipment placement and construction, as well.”

“That’s a massive amount of traffic. Every year it amps up. Demand for capacity is not slowing down,” Spindler said. “That is the most sectors in any system that I have been involved with.”

TE has experience providing DAS for large-venue, high-profile events, such as the Major League Baseball and National Hockey League all-star games, stretching all the way back to the Salt Lake City Winter Olympics in 2012

“There is a certain amount of prestige to have your equipment chosen to support a major event, such as the Super Bowl,” Spindler said. “It demands a lot of preparation and attention to detail from the design standpoint to make sure you have a system that will perform to the requirements. We work closely with all the constituents. The carriers each have specific ideas on the capacity needs that is going to be required. “

The original design of the DAS at the Cardinal’s stadium featured 850 MHz and 1900 MHz SISO and 700 MHz MIMO and AWS MIMO, and it served three operators. Along with additional sectors, the system will make room for an additional carrier, Sprint and its 800 MHz frequencies. It will also increase the use of MIMO and will use a double-starred design with a host goes out to multiple expansion groups, which then go out multiple remotes.

“We added roughly a third more sectors and went from SISO to MIMO at 1900 MHz, which is all about driving more capacity into the stadium,” Spindler said.

For the stadium alone there are three different headends. Two carriers are sharing one headend and the two other carriers each have their own headend.

Not All the Action is on the Gridiron

Everyone knows the game is only part of the Super Bowl experience as parties fill every club, hotel and open air venue. To provide blanket coverage, carriers have spent years pumping up the LTE data capacity not only in Glendale, but also central Phoenix and Scottsdale as well, with new advancements such as LTE advanced and broadcast LTE.

A base station hotel, two kilometers away from University of Phoenix stadium, feeds the stadium, Gila River Arena and the Renaissance Phoenix Downtown Hotel, using a TE digital fiber link. In downtown Phoenix, TE’s FlexWave Prism DAS has been deployed at the Hyatt Regency Hotel, the headquarters for NFL executives, and at CityScape, an outdoor visitor center.

Elsewhere, TE’s FlexWave Spectrum DAS with the CPRI digital interface unit has been deployed at US Airways Arena, which will serve as the media center. In addition, TE’s host-to-host technology has been deployed to link a base station hotel in downtown Phoenix with US Airways Arena, the Hyatt Regency, Chase Field and the Phoenix Convention Center.